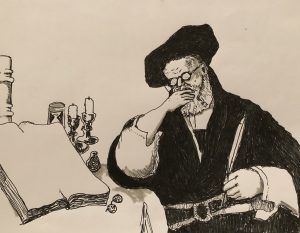 Robert Hooker was born in Chicago. He graduated from the University of Chicago and worked as an artificial intelligence researcher with the Institute for Learning Sciences at Northwestern University. He has lived and worked in London with long stays in Hong Kong, Sicily, and Tunisia. Since them

He has composed a number of pieces of art, illuminated documents, illustrations, water colours paintings, writing and also mixed media pieces in Chicago and London but also during the principle long travels from his nomadic lifestyle.

Travel is really central to understanding Robert’s work, Robert grew up taking long trips in parks of North America, and as an adult he has made seeing the world and recording his impressions a primary goal of his life. . He even married a photo journalist because he could actually live with her lifestyle of constant travel. This life has brought him to London, but he’s also conducted a number of principle trips that you see reflected in his work. Countries that had key influences n his work are Italy, China, Japan, Korea, India, Greece, Spain, Portugal, Africa and Vietnam.

He had composed a large number of his Dream Books, these are his primary partially illustrated, partially illuminated document, original writing that he composed whilst visiting cities, a large number of these Robert kept the tradition of only writing about that story when he would visit that city. He has made 4 trips to Hong Kong staying there for about 5 months in total. During this time, he’s always written about his myth of a City of Mars and a company of the Queens of Mars.

The Queen of Mars is the centre of a massive electronic city of living robots that is dying on the frozen surface of Mars. He keeps writing this same story sequence every single time he is in Hong Kong. So, the Hong Kong books are associated with that myth, on this story also that story is also linked to the Japanese the Korean, where he created related stories about Mars.

Hong Kong connects the Dream Books, sketches and paintings he has done, and through his indexing workings around places and cultures that influence you can see his work clustered not only around content and genre, but als his relationship to the world through his series of long travels.

He’s also written a number of books connected with different parts of Europe and Africa. He has created a series of books around Greece, Scotland and a massive series that he’s written in California called Neo-Nada-Nano California. Neo-Nada-Nano California is his code name for opus sequence of stories, illustrations and illuminations, which tell the long-term history of humanity going into hundreds of thousands of years. He has blended space opera with religious documents and try to give a kind of illuminated reverence to what science fiction story really could be, this are some of his favourite work, he’s worked on this stuff for 8 years.

He has done a great deal of this work in London, but also living in California, Vietnam, Italy and Spain.